Message from President K.Zh. Tokaev, which contains a program for the powerful advancement of the country, is entirely addressed to man, his creative creative forces. And it is deeply natural that a special place is given to youth policy, the need is emphasized “to focus on youth and the younger generation.” The youth must master the skills and treasures of the spiritual heritage of all generations of Kazakhstanis, strengthen unity, ensure the stability and security of our state, and be patriots of their fatherland. The younger generation should be followers and conductors of the ideas of a healthy lifestyle, actively engage in their physical improvement, and affirm in practice the principles of kindness, humanism and compassion. The strategy of Kazakhstan’s entry into the 21st century is focused primarily on young people.

Thus, the solution of the tasks set for the formation of a healthy lifestyle in the new environmental conditions should be aimed at improving and optimizing the current and future process of reforming all parties and components of the priority areas set by the President of the country K.Zh. Tokaev before the people of Kazakhstan in his Strategy.

To achieve the goal, the department solves the following tasks:

– approval of the principles of a healthy lifestyle, the involvement of students and university staff in regular physical education and sports in order to maintain and improve health;

– organization of sports and health-improving and sports-mass work among students and employees of the university.

In our time, a large role in attracting young people to physical culture and sports, and, consequently, to a healthy lifestyle, is assigned to universities.

Every year, in the Comprehensive Development Programs of KarTU, the university leadership sets big tasks to modernize the educational process, strengthen scientific and innovative activities and systemic measures to improve the quality of educational services, the competitiveness of education.

In the process of studying at KarTU in the course of physical education, the following tasks are to be solved:

The learning process at the department is organized depending on the state of health, the level of physical development and readiness of students, their sports qualifications, as well as taking into account the conditions and nature of the work of their future professional activity.

The direct responsibility for setting up and conducting the educational process for the physical education of students in accordance with the curriculum and the state program is assigned to the Department of Physical Education of the University. And mass health-improving, physical culture and sports work is carried out by the sports club together with the department and public organizations.

Medical examination and monitoring of the state of health of students during the academic year is carried out by a polyclinic or health center of the university.

Self-study contributes to a better assimilation of educational material, allows you to increase the total time of physical exercises, accelerates the process of physical improvement, is one of the ways to introduce physical culture and sports into the life and leisure of students.

Consciousness, gradualness, consistency, repetition, individualization, systematic, regularity – must necessarily take place when doing physical exercises. The principle of consciousness is aimed at educating those involved in a deep understanding of the role and significance of self-study in promoting health in the self-improvement of their body (body and spirit).

Together with training sessions, properly organized sessions provide optimal continuity and effectiveness of physical education. These classes can be held outside school hours on the instructions of teachers or in sections.

In the year of formation of the Karaganda Mining Institute and the Department of Physical Education, classes were held in the basement, which was adapted for physical education classes. After 2 years, a sports hall was built by students and teachers, which made it possible to conduct both academic and sectional classes and competitions in 8 sports. At that time, mass sports work was greatly developed: the football and hockey teams of the institute became winners of Kazakhstan, and other sports developed as well.

From 2015 to the present, the department is headed by the candidate of pedagogical sciences, I.L. Golovin.

Currently, there are 15 teachers in the staff of the department, of which: 1 is a candidate of pedagogical sciences,

1-honored coach of the Republic of Kazakhstan.

In order to improve physical education and improve the health of students and employees in 1961, a sports and health camp “Polytechnic” was created in Karkaralinsk. At the origins of its formation was the rector academician A.S. Saginov and the family of commandant F.I. Fedorchuk, which has been providing the operation of the camp for more than 60 years. The effectiveness of physical culture and sports classes in the camp increased due to their combination with favorable natural factors and the healing properties of the Karkaraly climate. A feature of the camp is the combination of training sessions (geophysical, geological practice) with recreational and sports work.

In 1966, a sports club was created, which for 25 years was led by the master of sports in boxing M.I. Kan is a graduate of the Leningrad Institute of Physical Education. Lesgaft. Receiver M.I. Kana in 1991 became a senior lecturer in the department of CH Kynah.

In October 2008, by decision of the Academic Council, the sports club became a separate division of the university.

At present, sports sections have been created and are operating in 16 sports, in which more than 450 people are involved.

Throughout the history of the university, the sports base has also developed. In 1963, a part of the main building under construction with a sports hall was put into operation. However, due to the growth in the number of students, the sports hall did not provide the normal conduct of the educational process and training sessions. In 1965, the construction of a sports complex began, the first stage was commissioned in 1969. The sports complex included: a game room and two specialized halls: wrestling and weightlifting. In 1985, 3 more halls were put into operation: a game hall, a table tennis hall, a wrestling hall. In 2006, 4 sites with artificial turf were built. In 2007, a major overhaul of the table tennis hall, exercise therapy hall was carried out, a ski base, a shooting range were built. In 2013, artificial turf was renovated in two football courts.

At present, the sports complex of the university is one of the largest facilities of universities in Kazakhstan. It consists of 9 specialized halls, which are equipped with modern equipment. 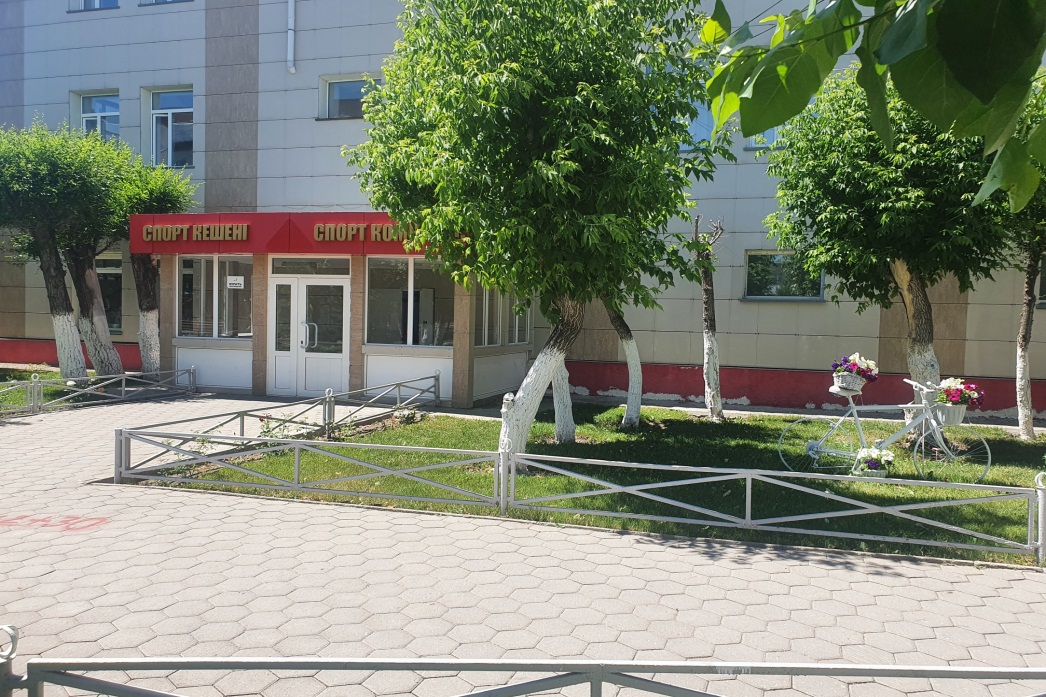 The university is rich in sports traditions in many sports – volleyball, basketball, athletics, chess, table tennis and other sports.

Sports honor was defended in the past by leading student athletes, and now by scientists, heads of departments, mines, including Sh.U. Urazalinov, G.M. Present, P.P. Nefedov, Doctor of Science K. Adilov, Yu.A. Wexler and more. others 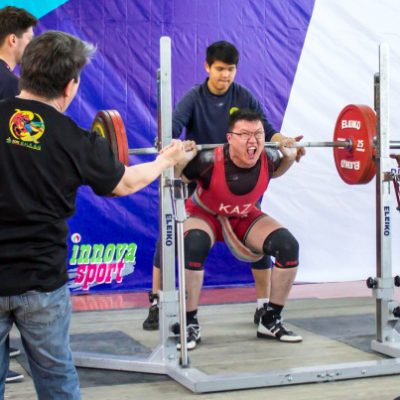 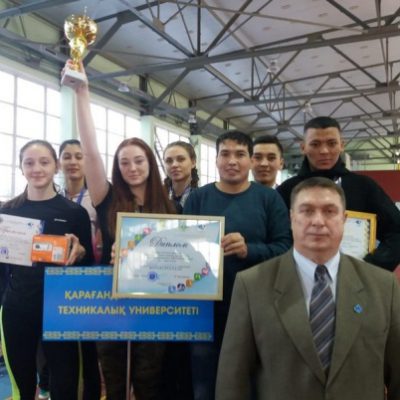 Since 2001, the Summer and Winter Universiades of the universities of the Republic of Kazakhstan have been resumed, at which the students of our university performed excellently. Champions and prize-winners in different years were: S. Sadykov (FEM), E. Perepilitsyn (EMF), A. Lysenko, E. Bibikova – table tennis; A. Ryapova (MF), D. Romanov (EMF) – athletics; V. Kuzhakhmetov (GF), Pustolaikin A. (FIT), Ponkrashov A. (TDF), and the team won the first team place – powerlifting. 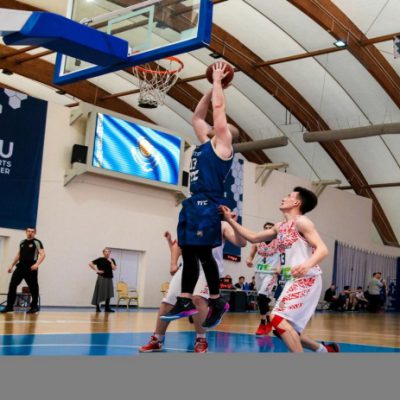 The first place was occupied by teams: volleyball (male), chess, winter all-around, cross-country skiing, basketball. The national men’s basketball team became a multiple winner of various competitions and tournaments, was the strongest student team in the central region of the Republic of Kazakhstan. Many players played for various professional clubs, were members of the national teams of the Republic of Kazakhstan. 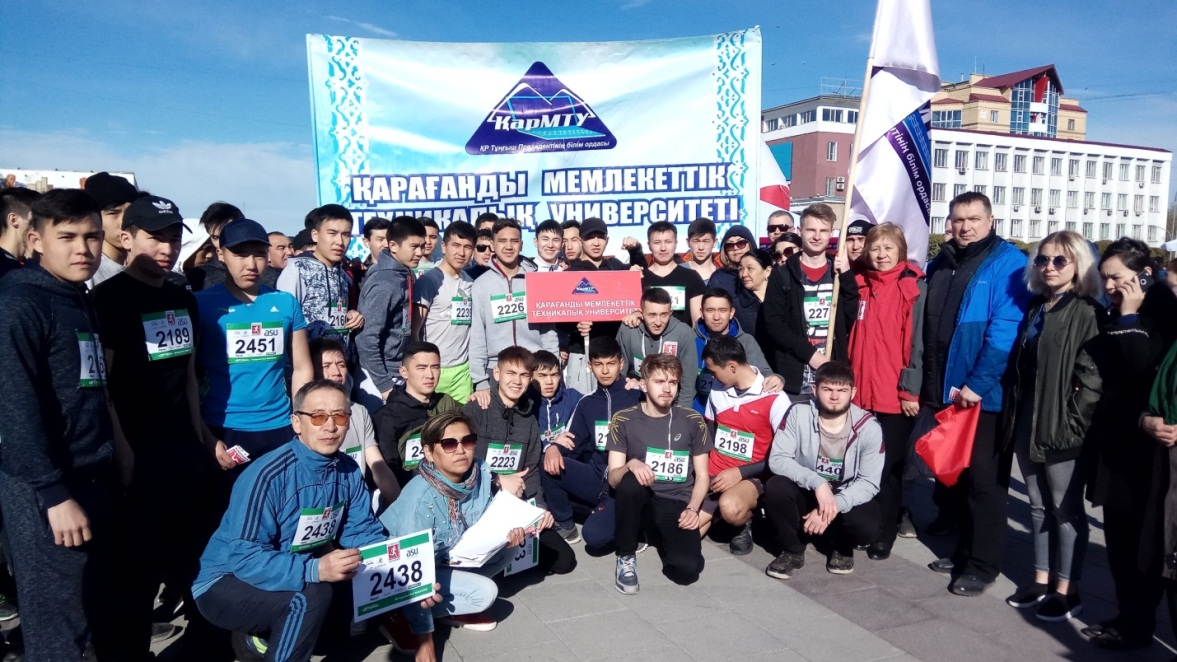 The Department of Physical Education together with “Zhas Orda” annually hold competitions among students living in a hostel in sports: mini-football, chess, checkers, togyz kumalak, table tennis, kettlebell lifting, sports holidays and tournaments. KarTU has repeatedly acted as the organizer of the regional youth student games for the prizes of the akim of the Karaganda region.

The management of the University pays great attention to the department and the sports club. Funds are allocated for the purchase of sports equipment and equipment for the department, for the implementation of the educational process and training sessions in various sports, as well as for scientific research on the topics of the department.

Every year, the department conducts research work on the topic of the department, a student circle works, based on the results of research work, scientific articles, abstracts of reports at scientific conferences are published, monographs, textbooks, educational methodological recommendations are published, copyright certificates are obtained. Active research work is carried out with students, whose works take part in annual business project competitions.

In the 2014-2015 academic year, KarTU was visited by the chairman of the Agency for Physical Culture and Sports of the Republic of Kazakhstan T. Yesentaev and the head of the department of physical culture and sports of the Karaganda region N. Sukhorukova, they appreciated the fruitful work of the KarTU team.