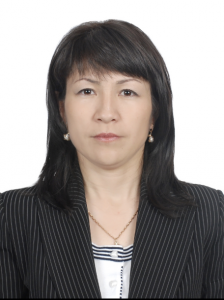 Candidate of Economic Sciences, Associate Professor, Head of the Department «Economics and Enterprise Management», Member of the Republican Educational and Methodological Council in the direction of «Business and Management» of NJSC «Narxoz University».

In 1998 she graduated with honors from Zhezkazgan University named after O.A. Baikonurov with a degree in Economics and Management at the Enterprise, received a qualification – a mining engineer-economist.

She began her career in 1998 as an assistant at the Department of Economics and Management of Zhezkazgan University named after O.A. Baikonurov. She studied at the postgraduate course at the Institute of Regional Development from 1999 to 2004. She defended her thesis for the degree of candidate of economic sciences in the specialty 08.00.05 «Economics and management of the national economy» in the state language in the Dissertation Council of the Karaganda Economic University of Kazpotrebsoyuz in 2007.

In Karaganda Technical University she worked as an associate professor since 01.09.2009, as head of the department she has been working since 03.02.2020 to the present.

Actively participates in the scientific activities of the university, in 2017-2019 she worked as a Specialist in commercialization and marketing for the 096-16GC project «Increasing the corrosion resistance of ferrous and non-ferrous metals by using galloisite nanotubes» according to the Agreement with JSC «Science Foundation» № 291 dated December 23, 2016, and was also the responsible executor of 5 contractual scientific works performed by the department «Economics and management of the enterprise», in 2021 she led 3 scientific projects on the contract. In 2022, she is the responsible executor for the scientific project of the economic agreement under the number 22.33.01.

She has letters of thanks from the director of the National Testing Center for active participation in the organization and conduct of the UNT, from the Chairman of the Board-Rector of NJSC “Karaganda Technical University”. She was awarded the Jubilee Medal for the 100th anniversary of Academician Saginov for his great contribution to the development of the university. In 2021 received a Certificate for the academic title – Associate Professor (Associate Professor).

Awarded with a diploma for active participation in the International Conference «Saginov Readings» in 2016-2018.

Every year, under her guidance, students actively participate in various international conferences, where they won prizes, for example, a student of group E-17-2 kaz Toleukhan Aygerim took 2nd place in the International Conference «Saginov Readings» in 2020,

She was the head of the student group FІEM-18-3 Pernebai Nazerke, who took 3rd place in the Republican Olympiad in the specialty «Assessment».

Over the past 6 years, she has published more than 45 scientific papers, including in journals included in the Scopus database – 3; in publications recommended by the authorized body – 13; in scientific journals included in the RSCI database – 6, received: 1 – Eurasian patent, 4 patents of the Republic of Kazakhstan, 8 certificates about the state registration of rights to the object of copyright.

Readable disciplines for bachelor’s and master’s programs in the state language: Accounting, Economics of the enterprise, Fundamentals of economics, Strategic analysis and planning of the mining enterprise, Methods of teaching economic disciplines.